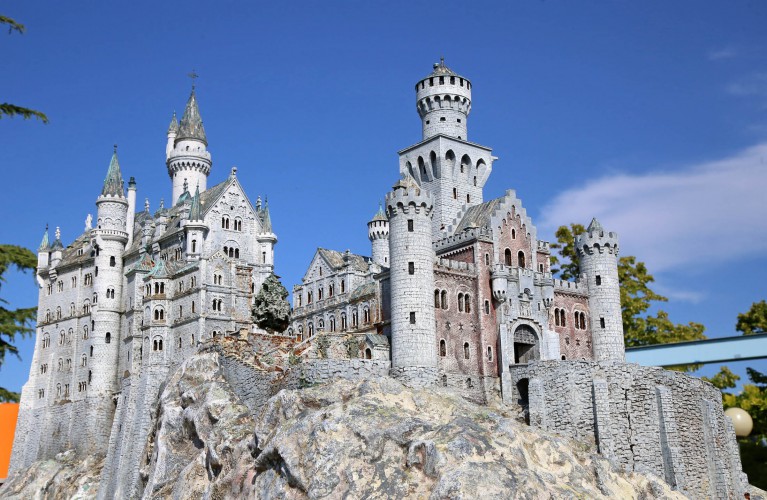 It is one of the main tourist destinations of Bavaria and the whole of Germany, towering with its 965 m over the surrounding landscape. It was built starting from 1869 based on a project by the stage designer Christian Jank, upon request by king Ludwig II(1845-1886).

The external architecture of the castle is inspired by the old German feudal residences, specifically by the medieval fortress in Wartburg, Thuringia, which king Ludwig II so admired during his journey of 1867.

The throne room is in Byzantine style. The steps in Carrara marble lead to the apse, which was meant to tower above a golden and ivory throne, never realized following the king's death. There are also important paintings, like "The battle between Saint George and the dragon".
The big candelabra, in Byzantine style and made of golden brass, features 96 candles, while the mosaic flooring is made up of over 2 million tesserae.

The king bedroom is a true late Gothic jewel. Magnificent and impressive, it is graced by stunning oak wood carvings. Fourteen carvers worked in this sole room for a period of 4 years. The washbasin featured running water, coming from a spring 200 m above the castle.

A fake grotto complete with stalactites and stalagmites takes you to the royal living room, which consists of a wide salon and a smaller room, separated by columns and called "the swans' corner". The doors of the great library, in Romanticist style, are decorated by paintings depicting the stories of Tristan and Isolde and of Sigfrid.

The choir room was illuminated by 600 candles, but it was never in use during Ludwig's life.

The Neuschwanstein castle, thanks to its fairy tale look, was taken as a model by Walt Disney for some of its most famous cartoons, such as Snow White and the Seven Dwarfs, Cinderella and Sleeping Beauty.