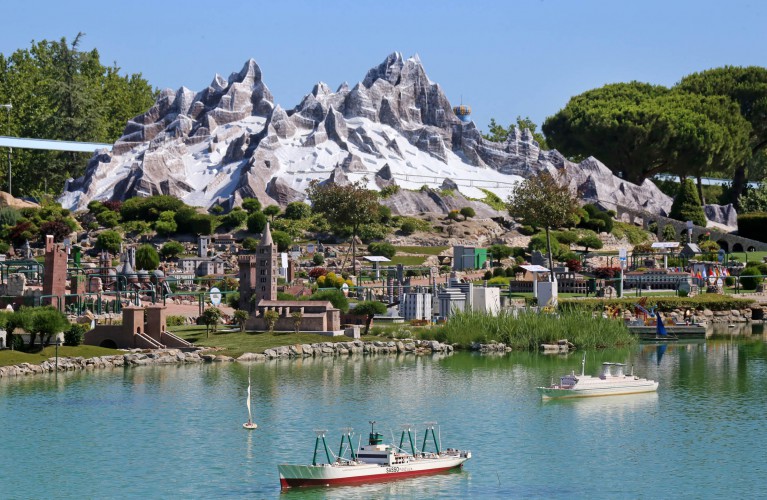 Mont Blanc - the highest peak in the Alps and in Europe. An enormous granite mass, thick with needles and crests, carved with deep valleys cut by huge rivers of ice which separate the Valley of Chamonix from the Valley of Aosta. The two highest peaks (Mont Blanc, 4810 metres and Mont Blanc di Courmayeur, 4807 metres) are both Italian. There are thirty glaciers, the largest of which flow down into France. The first ascent was made from Chamonix on August 8, 1786, by the Alpine guide Jacques Balmat and Dr. Michele Paccard. On the much steeper Italian side, Felice Giordano was the first to scale the mountain (August 6, 1864).

The first winter ascent was made by Q. Sella on January 5, 1888. A 11,700 metre long tunnel cuts through Mont Blanc, linking the road from the Valley of Aosta with that in French territory running through the Valley of Chamonix.

St. Pierre Castle has an appearance reminiscent of children's fairytales. Perched high up on a crag it seems to be all of a piece with the rock on which it stands. The band of towers crowning the construction are connected by a series of arches which lend the castle an unreal quality. An initial castle was started by the Lords of St. Pierre before being passed on to the noble Roncas family. After almost a century of neglect it was bought and transformed into the Norman style by the historian Bollati, who towards the end of the nineteenth century was made Baron St. Pierre by Umberto I.

The Castle of Aymavilles dominates the entrance of the Cogne Valley and differs from the others in terms of its unusual exterior. The four crenellated towers were built in 1357 to reinforce the original settlement and to this neo-classical style buildings with porticoes were added in the eighteenth century. The domain of Fenis was conceded to Gotofredo II in 1242 and work was started on the castle in about 1340.

From the outside it conveys an aura of power thanks to its ring of crenellated towers and embattlements which overlap and intertwine. Rich in bartizans and merlons it gives the impression of being a large castle when it is in fact actually quite small.