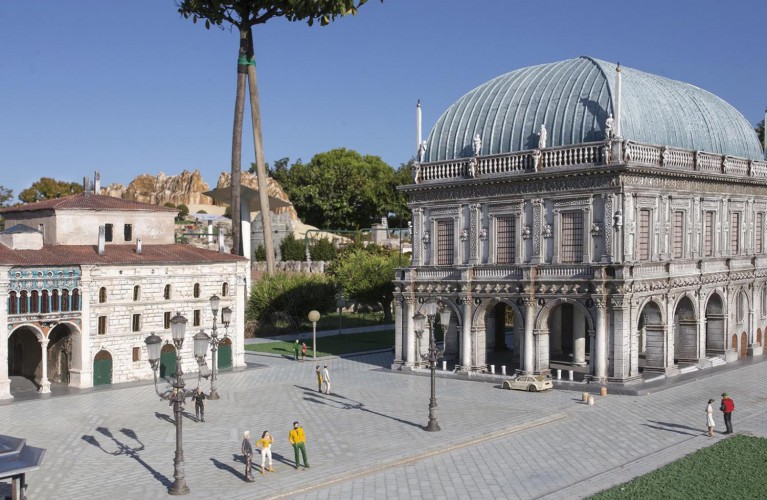 The Duomo of Milan is the largest Gothic structure in Italy. It was started in 1386 under the guidance of Gian Galeazzo Visconti, although the architect that designed it remains unknown. The works came under the direction of some of the best French and German masters. As of the early fifteenth century the works were superintended by Filippo degli Organi, Solari and Amedeo, followed by Pellegrini, L. Buzzi, Bassi and C. Buzzi. In the years from 1765 to 1769 the spire was raised and surmounted with a statue of the Madonna, reaching 108.50 metres in height. It was not until the beginning of the nineteenth century that the façade was completed and only in 1858 were all the spires erected.

The magnificence of the building is accentuated by its skywards pointing structure which is lost at the top amongst the many spires (135 in all) and the proliferation of statues (2,254 in total), which populate its sides and pinnacles. The lower part of the façade is Baroque in style (built following the designs of Pellegrini), but changes into the Gothic style in the upper reaches. Of the five sixteenth century doorways four have modern bronze doors.

The Arcade (Galleria) was built in 1877 by Giuseppe Mengoni and is known to the Milanese as "Il Salotto" (the drawing room). It serves to link the Cathedral square to the Piazza della Scala. The arcade is in the form of a cross and the longest section is 195 metres long. The dome, rising to a height of 50 metres, is of ironwork and glass and in the octagon beneath it are depicted the continents of Europe, Africa, Asia and America in mosaic work.

For many years the Arcade was the distinguished meeting place of musicians and artistes from the "Scala" opera house, as well as industrialists, businessmen and men of culture. Today it is still an extremely lively venue, lined with luxurious cafés, elegant shops and prestigious bookshops.

The Fortress of Angera dominates the town overlooking Lake Maggiore opposite Arona. Its situation is of great strategic importance and permitted the control of the lower basin on the lake and access to Milanese territories. For many years it was at the centre of the struggle between the "Torriani" and the archbishop Ottone Visconti for control of Lombardy and the seignory of Milan. In the mid fourteenth century it came under the domain of the Visconti.

In 1449 the Ambrosian (Milanese) Republic conceded the land to Count Vitalino dei Borromeo and it has remained in his family's possession up to the present day. The oldest part of the Castle, known as the Castellana, comprises the tower in the west corner. At the end of the thirteenth century the south body of the building was added, holding the beautiful Hall of Justice. Subsequently further wings were added and the courtyard was closed off, thus rendering the building more suitable for both military and residential purposes.

San Michele is the oldest Romanesque church in Pavia and during the Middle Ages many kings and emperors were crowned there. The Basilica dates back to 661, but it was rebuilt in around 1120. The building, with yellow sandstone at the bottom and red bricks at the top, creates a wonderful harmony of colours.

The vertical sweep of the façade is accentuated by the blind loggia at the top and imposing cable decorations which divide it into three sections. The façade is embellished with fanciful sculptures of human figures and animals in addition to the beautifully decorated doorways which appear to be almost dug out of the walls themselves.

Historically, the Sforzesco Castle dates back to the fourteenth century when Galeazzo II Visconti started building a fortress. After a number of modifications the Castle was destroyed and sacked in the middle of the fifteenth century by the Republic of Milan. Following this the castle was taken over by Francesco Sforza who started building work on a fortress for his own defence purposes. These plans, however, were taken over by more ambitious architectural plans and the building became a refined, luxury abode.

When Ludovic the Moor came to power the castle became one of the most sumptuous of palaces, with artists such as Bramante and Leonardo working on the interior decorations. The enormous four-sided complex is based around three courtyards. The largest of these, known as the Piazza d'Armi (Armoury Square) has the look of a fortified enclosure. Beyond this square and an internal moat guarded over by the Bona di Savoy tower stretches the residential section, with the austere Rocchetta Courtyard and the Ducal Courtyard.

The Sforzesco Castle was badly damaged during the Second World War, but after recent restructuring it is now ready for its new role as a museum.

The Piazza delle Erbe (Square of Grass) is one of the most beautiful squares in Mantova. It is surrounded by medieval buildings and dominated by the Clock Tower, adorned with a clock dating to 1473 and a Madonna from the end of the sixteenth century. The square is also home to the thirteenth century Palazzo della Ragione (Palace of Reason) with its portico, three lighted windows and crenellations.

Of particular interest are the Rotonda di San Lorenzo, an ancient temple from the sixth century, and the Palazzo del Broletto where, in a niche on the façade, one finds a statue of Virgil at his desk, reading, which dates to the thirteenth century.

The Piazza del Comune (Town Hall Square) in Cremona is one of the most picturesque Medieval squares in Italy. It lies at the heart of the city and is surrounded by beautiful Romanesque buildings. One of these is the Torrazzo; the highest masonry bell tower in Italy. From the top of the tower, reached by climbing 487 steps, one is greeted by a wonderful view of the surrounding area. The Cathedral of Cremona is dedicated to Our Lady of the Assumption.

Its foundation dates back to 1109 and it was enlarged in the thirteenth and fifteenth centuries. The cathedral has three façades; the main one, covered in red Verona marble and two more at the head of the transept.

The Baptistery, facing onto the façade, is a Romanesque construction laid out in an octagon and dating back to 1167. The other buildings on the square are the Loggia dei Militi from 1292 and the Palazzo del Comune (town hall) which used to be called the Palazzo dei Nobili (Palace of Nobles or Ghibellines).

Via Gombito, which was for centuries the main thoroughfare of Bergamo, leads into the beautiful Piazza Vecchia. Opposite the graceful Contarini Fountain sits the Palazzo della Ragione (Palace of Reason), the oldest of the municipal buildings with its attractive gothic windows with three lights and lancets, which dates back to the end of the twelfth century. The impressive nature of the Palazzo is further accentuated by the mighty Torre Comunale (town hall tower). In the background one can see the outlines of the Basilica di Santa Maria Maggiore and the Colleoni Chapel.

The Chapel, built in 1475, represents one of the earliest expressions of the Lombard Renaissance artists. Particularly noteworthy are the decorations, friezes and bass-relief that adorn the windows and pillars. In the band above the plinth one finds quadrangular sections depicting scenes from the Old Testament.

The Basilica di Santa Maria Maggiore, a complex Romanesque construction, was started in 1137. The left-hand side of the façade and doorway are preceded by a beautiful fourteenth century prothyrum, decorated in precious polychrome marble and resting on two imposing lions. In the arches above the prothyrum stand statues of Saint Barnama and Saint Proiettizio in addition to an equestrian statue of Saint Alessandro.

The Piazza della Loggia is the artistic heart of Brescia. The square is surrounded by buildings of considerable architectural importance and on the south side enclosed by the Palazzo del Monte di Pietà, which is divided into three sections by two arches against which stands an elegant Venetian-style loggia. On the east side one finds the porticoed Palazzo Cinquecentesco with its clock tower.

To the west is the Loggia which dominates the square. Building work started on the Loggia in 1492 and was only completed after numerous interruptions in 1574. Many great names contributed to its construction: Tommaso Formentone made the working model, Jacopo Sansovino designed the upper section, and Palladio, Alessi and Rusconi also contributed. 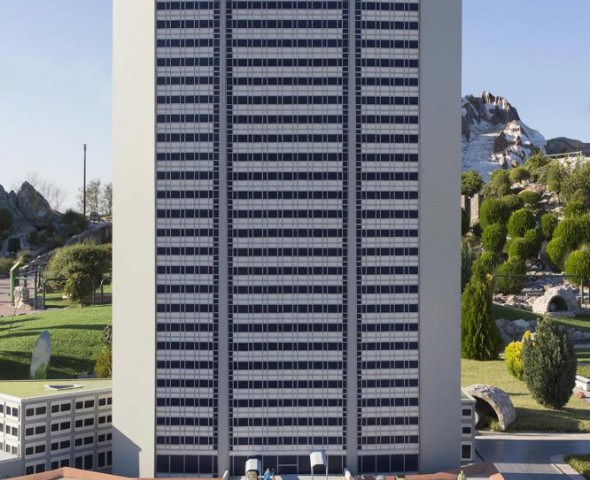 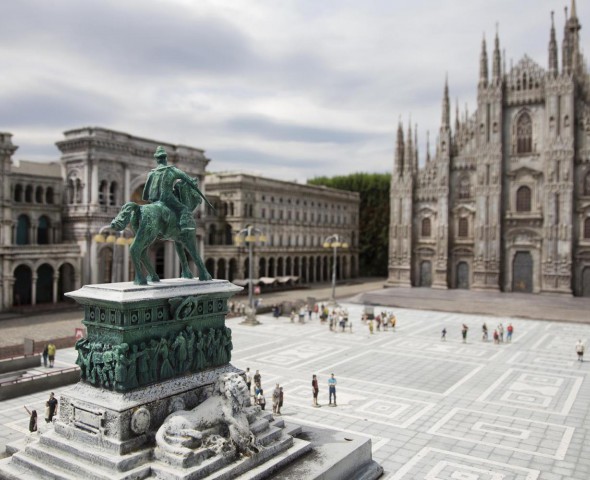 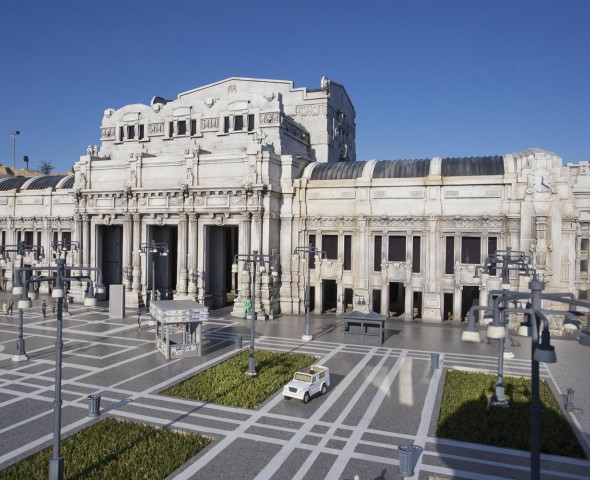 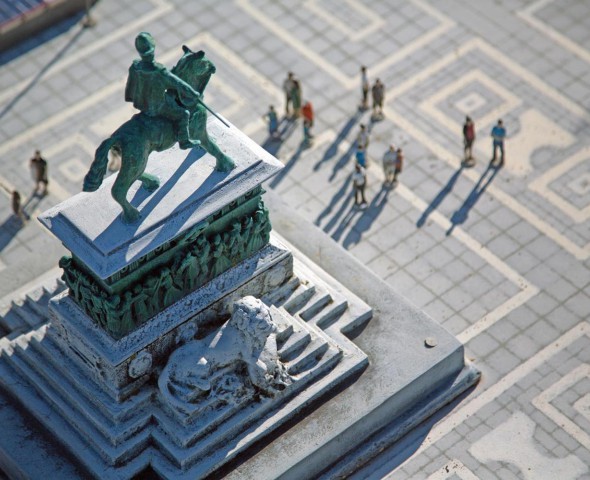