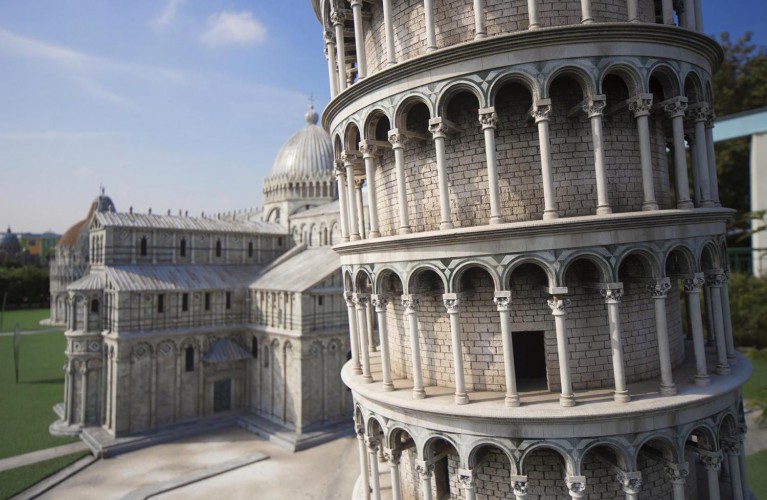 The square occupies the site of the ancient Roman Forum and at all times in its history has been the focal point of civic life in Siena. Highly original in shape, like the concave half of a shell, the square is surrounded by the Palazzo Pubblico which creates a wondrous backdrop. This was built between 1298 and 1342, partly in stone and partly in brickwork, and consists of a central body with two higher wings which were added in 1681. In one corner stands the extremely slender tower, Torre del Mangia, 102 metres tall and dating from 1349, with its shaft in brickwork and crown in marble corbels. All around the square stand old palaces, some crenellated and turreted, the most outstanding the three floored Palazzo Sansedoni from the fourteenth century. In the middle of the square is the magnificent Gaia Fountain, a reproduction of the fountain attributed to Jacopo della Quercia and now kept in the Palazzo Pubblico. The square has hosted the famous Siena horse race, the Palio, since 1656, famous for the extraordinary participation it excites in the townspeople and sixteenth century costumes of the procession. It is held twice a year, on July 2 and August 6.

The Piazza della Cisterna takes its name from the second century water tank standing in the centre of the square. It is famous for various architectural masterpieces, its triangular shape and the floor brickwork in a herring-bone pattern. It is surrounded by historic buildings: the Palazzo dei Cortesi with its very tall tower still perfectly intact, the fourteenth century Palazzo Tortoli with its beautiful mullioned windows and the adjacent tower, Torre Tronca, the thirteenth century Casa Salvestrini, and to the east the twin towers, Torri degli Ardinghelli dating from the thirteenth century. The Piazza del Duomo (Cathedral Square) is dominated by the cathedral, or collegiate church, which is reached from a long flight of steps and forms the historic centre of San Gimignano.

Opposite the cathedral stands the Palazzo del Podestà, built in 1239 and enlarged in 1337. The palace has a beautiful loggia and its tower, known as La Rognosa (the Scabby), is 51 metres high, the utmost limit allowed to those of San Gimignano who wanted to build a tower. To the south of the square stands the Palazzo del Popolo with its easily recognisable Torre Grosso (Great Tower). To the north stand the picturesque twin towers, Torri Gemelle dei Salvucci.

The Leaning Tower.  Famous the world over for its graceful architecture and unique lean. Building on the tower started in 1173 but was interrupted following the subsidence which is actually the cause of its lean. Work was resumed in 1275 under Giovanni di Simone and completed, it is believed, by Tommaso di Andrea di Pondera towards the end of the fourteenth century. The north side of the tower is 55.22 metres tall, whilst the south side reaches a height of only 54.52 metres with a deviation from the vertical of 4.265 metres. It was here that Galileo Galilei carried out his famous experiments on the fall of bodies.

Basilica: The Basilica was started in 1063 by Buschetto and the façade completed in the thirteenth century by Rainoldo. The three bronze doorways were sculpted by the followers of Gianbologna towards the end of the sixteenth century and depict “The stories of Mary and the Redeemer”. The door of San Ranieri, which its wonderful bronze panels by Bonanno Pisano and dating to 1180, is the used as the main entrance.

Baptistery: The Baptistery was started in 1152 by Diotislavi, continued in the thirtenth century by Nicola and Giovanni Pisano and completed in the second half of the fourteenth century under the direction of Cellino di Nese. The most noteworthy of the four doorways is the one situated opposite the Cathedral.

The ultimate historic religious building in the gothic style, with its sweeping and simple lines which became characteristic of Florence. Work began in 1296 under the guidance of Arnolfo da Cambio. Following his death, the building work was continued and enlarged in 1331 and 1357, under the direction of F. Talenti. Brunelleschi's dome was constructed between 1420 and 1434 and crowned with its lantern in 1461.

The plain façade is the work of De Fabris who was inspired by the design of the side walls from which open the door to the Bell Tower and Canon's door, both of which date back to the fourteenth century. The vast gallery and the Porta Mandorla (almond door) from the beginning of the fifteenth century, in Renaissance-gothic style with reliefs by Nanni di Banco, are also of great interest.

Also called Palazzo della Signoria, was built between 1298 and 1314, traditionally attributed to Arnolfo da Cambio. In the sixteenth century it was enlarged in works undertaken by Buontalenti and Vasari. The original heart of the building is crowned with a crenellated gallery from which rises the slender tower, known as "D'Arnolfo", which is 94 metres high.

Up until the sixteenth century the palace was the seat of the Government of the Republic. From 1865 to 1871 the Deputies of the Kingdom of Italy held their sittings there. From 1872 to the present day it has been the seat of the town council. 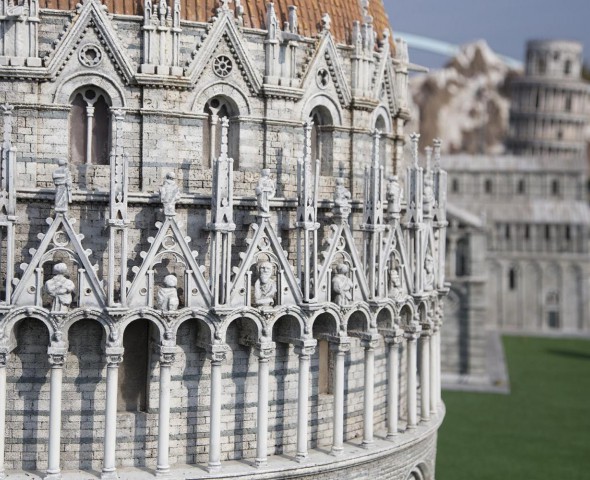 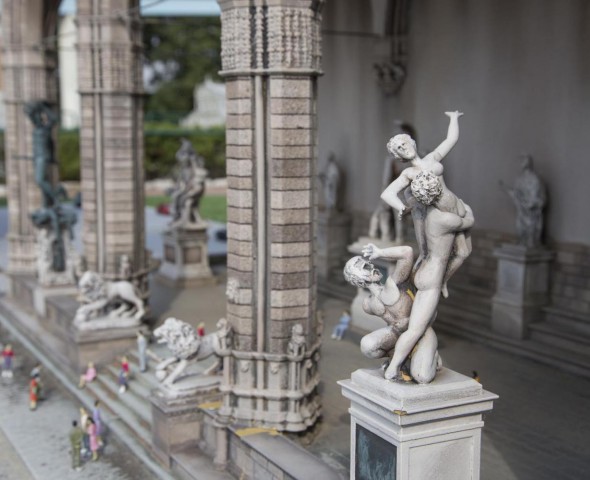 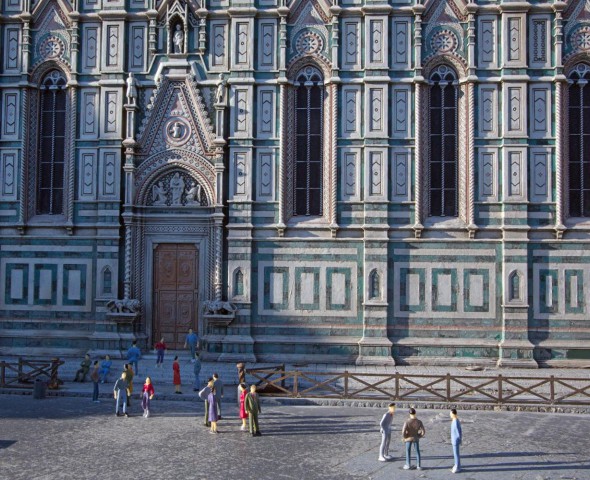