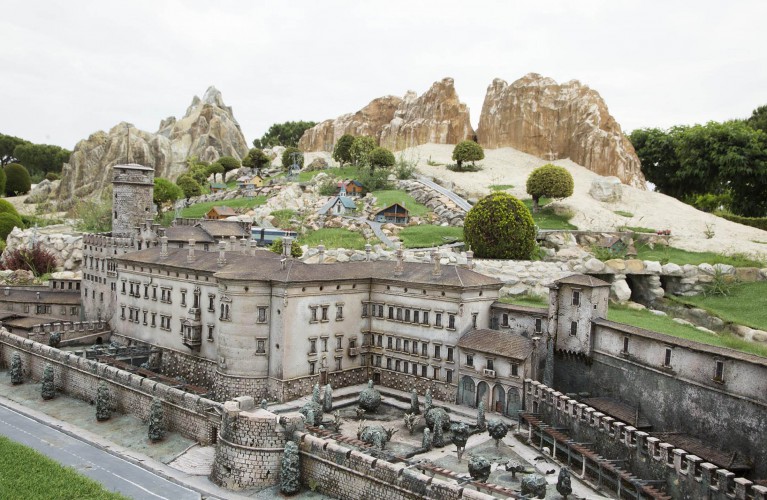 The Castle, once the residence of the Principi Vescovili (Episcopal Princes), rises from within an encircling wall equipped with low embattled towers. It is made up of a number of buildings, to the north stands the Castelvecchio (Old Castle), dating from the thirteenth century and modified in 1475 in Gothic Venetian style. It is dominated by the great round tower, with crenellated walls and a beautiful loggia. The “middle part” was built in the sixteen hundreds in conjunction with the Magno Palazzo (Great palace). The southern section of the old castle is in Renaissance style.

The castle was built by Bishop Bernardo Clesio in 1526 and holds a sacred position in the new Italian state as the place of martyrdom of many men in 1848 and 1916.

The two areas in remembrance of the martyrs of 1848, the memorial stone recording the shooting of Damiano Chiesa (May 19, 1916) and the prison cells where Cesare Battisti and Fabio Filzi were held and tortured during their trial, after which they were hanged (July 12, 1916) are both moving and exalting. Today the halls of the ancient building house the National Museum of Trentino.

The Three Peaks of Lavaredo

The Three Peaks lie in the Sextus Dolomites in the extreme north-east corner of the vast Dolomite territory in the Province of Bolzano and Belluno. From any vantage point this pearl of the Dolomites is of sublime beauty. The peaks in this group are the most famous of the many well-known peaks in the Dolomites: the western Lavaredo peak (2,973 metres), the Great peak (2,999 metres) and the Piccola (Small) peak (2,856 metres) which is directly linked to the Frida peak (2,785 metres) and the Piccolissima (Tiny) peak (2,700 metres).

From a geological perspective, they are made of Triassic Dolomite rock. Intimately linked to competitive mountaineering, the peaks have been scaled as follows: the Great peak by Paul Grohmann, south face, 21/8/1869; the West peak by G. Ploner, south face, August 1879. Peak Piccola by Michael Josf Innerkofler, south-west face (the usual one), on 25/7/1881. Peak Piccolissima by Paul Preuss and Paul Relly, north-east face, on 6/9/1911..

Bolzano Cathedral rises up from Piazza Walther. Construction started in 1300 on the site of the ancient church of Santa Maria. The simple façade is adorned with a beautiful rosette and a doorway headed by a prothyrum. Next to the cathedral stands the elegant bell tower, crowned by a high fretworked spire. The main town of the Alto Adige province is always kept looking beautiful with colourful and well-tended flowerbeds.