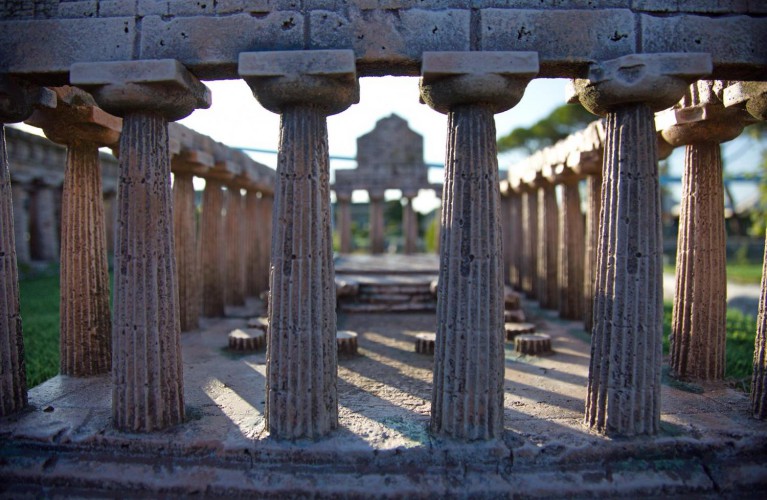 The Royal Palace was home to the enlightened and magnificent Bourbon king, Charles III. Destined to rival the Palace of Versailles, it was the work of the architect Luigi Vanvitelli. Laid out on a rectangular design, the palace spreads over an area of more than 51,000 square metres. It is 42 metres in height and 250 metres in length.

The sides extend back towards the vast park for 202 metres. The enormous edifice has 1,200 rooms lit by 1,790 windows. Today the palace is a splendid memorial to an age and style, a splendour and wealth no longer seen since the reign of Napoleon.

Piazza Plebiscito is one of the most important historic squares in Naples. It is surrounded by the lengthy façade of the royal palace which dates back to the seventeenth century, the colonnade which skirts the church of San Francesco di Paolo, by the Palazzo Salerno and the Palazzo della Prefettura (Prefecture Hall).

The church of San Francesco di Paolo was built between 1817 and 1846 by Pietro Bianchi by order of Ferdinand I of Boubon, to celebrate his reconquest of the kingdom. In reduced dimensions, it reproduces the neo-classical style of the Pantheon in Rome.
The Doric colonnade was added at a later date by Gioacchino Murat.

Castel dell'Ovo was the most state-of-the-art section of the defence system, built on a rocky cliff it was linked to dry land by a narrow bridge. It was destroyed by the Spanish in 1503, who then rebuilt it in 1691.

The Castel Nuovo (New Castle) is inaccurately known as the Angevin keep due to its Angevin origins (1279 - 1282), although it was completely rebuilt during the reign of Alfonso I of Aragon by the Catalan Legrere (1443 - 1453).

Restored in the style of the fifteenth century it appears today in the form of a compact trapezoid, fortified at its corners by imposing crenellated towers.

On the main façade are found the Guard's Tower, Half Tower and St. George's Tower. The first two towers lock up the marble Arch of Triumph which creates an impressive gateway into the Castle, built according to the design of Francesco Laurana and celebrating the triumph of Alfonso I of Aragon in 1443.

The reliefs depicting the triumph of Alfonso I and the statues placed in the niches are of particular artistic value.

The Temple, which is known as Neptune's but was in truth dedicated to Era, was built in the fifth century BC. It was given its present name in the eighteenth century as it was deemed the most important and consequently deserved to be dedicated to the deity from whom the city takes its name - Poseidon, god of the sea.

Neptune's Temple measures 24.30 metres by 59.90 metres and has six columns along its shorter sides and fourteen along the longer ones. The inner room is preceded by a pronaos with two columns between the doors and a dome.

The inner room is divided into three naves by two double rows of columns: the taller ones are smaller in diameter than the shorter ones. This technique, apart from to adding more majesty to the temple, allowed the weight of the roof to be distributed in a more even manner. No trace of the roof remains, however.

One outstanding characteristic of Neptune's Temple is the curvature of horizon. The technical device used here, known as an optical adjustment, predates its use on the Parthenon in Athens.

The Arch of Trajan in Benevento was built between 114 and 117 AD at the top of Via Traiana which, built by Emperor Trajan, was needed to shorten the march from Rome to Brindisi.

The Arch is one of the most important examples of Roman art. Both its faces are covered with sculptured panels which are alternated with bands of decorative imagery.
The panels of the facades and the interior of the barrel-vault depict stories and episodes from the life of Trajan.

The Arch is 15.60 metres high, whilst the barrel-vault is 8.60 metres and is preserved in perfect condition.

Forum, Basilica and Temple of Apollo and Diana

Pompeii, together with Herculaneum, was completely destroyed nineteen centuries ago, on August 24, 79 AD when Vesuvius suddenly erupted. Although the eruption brought about the death of many inhabitants, at the same time it had the effect of preserving, as if in a realistic photographic report, remains of the city which bear witness to the environment and lifestyle typical of the Roman Empire at its most opulent. The ruins were discovered by chance towards the end of the sixteenth century although archaeological digs did not get underway until 1748 under Charles III of Bourbon.

Today it is open to the public and, apart from the houses and streets which are full of character and history, there are many other wonderful remains. Amongst these is the Forum, the centre of civic life, a rectangular square running from north to south and lined with porticoes. On the west side of the Forum lies the Basilica, a typical Roman building and the most important civic edifice in Pompeii.

Built in the Samnite period it was used for a variety of purposes, chiefly judiciary, commercial and political. On the same side as the Basilica one finds the Temple of Apollo, also known as the Temple of Diana, owing to the bronze statues within depicting these two mythological figures. 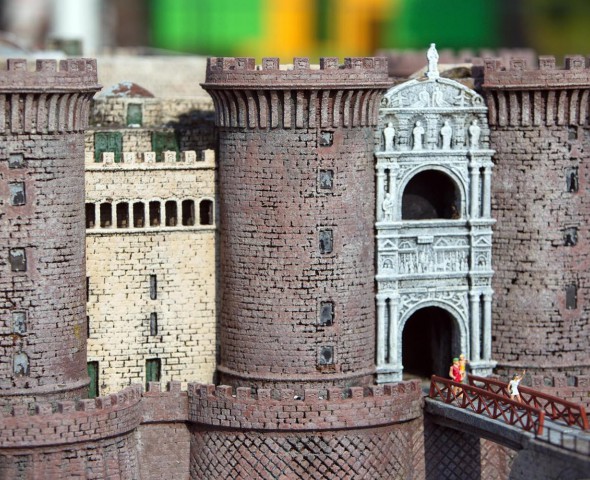 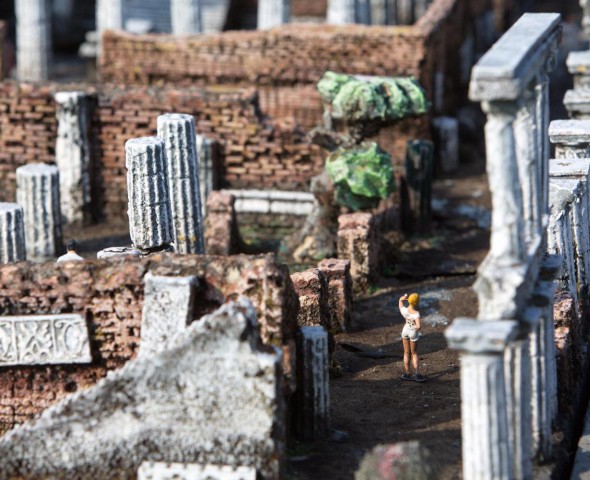