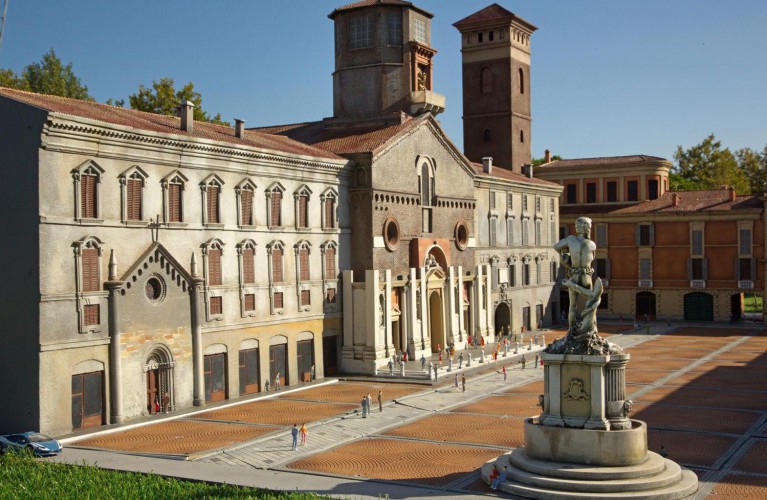 Gothic Palace and Equestrian Statues of Ranuccio I and Alessandro Farnese

The Palazzo Gotico in Piacenza was started in 1281 and was the work of city architects. The building we can see today is not even a quarter of the construction which was planned but never completed. It is one of the most beautiful town halls in Italy, owing to the combination of marble and brickwork, the precious terracotta decoration around the windows and the great variety of styles. The front is made up of five pointed arches with six corresponding windows. In a niche resides the Madonna di Piazza.

The well-known great bell is situated in the middle turret of the crenellations and in the past used to call the townspeople on special occasions. To one side of the palace one finds two beautiful equestrian statues of Alessandro and Ranuccio I Farnese.

The Arch of Augustus

The Arch was built in honour of Augustus at the point where the ancient Via Flaminia ends and the Via Emilia starts. It is the most ancient of the triumphal Roman arches still standing today. The decorative ensemble is composed of a one-sided arch, flanked by columns and topped with a gable. The overall height of the Arch, not including the crenellations which were added in the Middle Ages, is 15.86 metres.

The basilica dominates the vast plains of the city of Classe, the ancient port of Ravenna. It was built in the sixth century by wish of the bishop to honour the memory of Bishop Apollinare.

In front of the ornate façade containing a window with three lights is a portico. Along the sides of the building are windows and blind arches. The tenth century cylindrical bell tower is the highest in Ravenna. The interior is divided into three wide naves separated by twenty-four beautiful columns with Byzantine capitals decorated with fretworked foliage. The apse is embellished with wonderful sixth and seventh century mosaics with symbolic illustrations. The mosaic in the basin shows the effigy of Christ on a cross encircled by a crown and the Holy Father coming out from behind a cloud and pointing to Jesus. On the sides are Moses and Eliah, and the three lambs at the bottom represent the Apostles Peter, James and John.

The lower part of the mosaic shows a field, trees, flowers and birds, and in the middle is Saint Apollinare praying with six sheep at his sides that represent the faithful.

The Mausoleum is an unusual, massive structure with many sides and two floors in the Barbarian style. The lower floor has blind arches and the upper is encircled by a terrace. On the top is a dome carved out of one single piece of limestone from Istria, 1 metre thick and 34 metres in circumference. It was erected on command of King Goth Theodoric in 520 and inside one still finds today a vat containing his mortal remains.

Construction work started on the Theatre of Parma in 1821 following the design of Nicola Bettoli. Built on part of the area of the Monastery of San Alessandro and opposite the Palazzo Ducale (Ducal Palace) it was ideally located to fulfil the needs of the nobility as a venue for theatrical performances. Furthermore, the avant-corps and porticoed arcade of the Royal Theatre of Parma created an open space used for a variety of religious, political and recreational functions and purposes.

The Cathedral is the most important historic building in the city of Modena. Building work started in 1099 and the cathedral was consecrated with full ceremony in 1184 by Pope Lucius III. The sculptures by Wiligelmo to each side of the doorway are of particular interest. Above the apse rises a magnificent Gothic rosette. On the left hand, south side one finds the Romanesque Porta dei Principi (Princes' Doorway), and on the right side opens the Porta Regia (Royal Doorway). On the north side is the Porta della Pescheria (Fish market doorway).

Attention should also be drawn to the way the three apses lean towards the tower, which in turn leans towards them. The tower was erected at about the same time as the cathedral and was finished in 1319. The name "Ghirlandina" (Little Garland) derives from the crown of columns encircling the upper reaches of the cathedral and which have became the symbol of the city. The six-storey cathedral reaches a total height of 86.12 metres and leans at an angle of 1.40 metres.

In 1225, following the orders of the Ordelaffi family, Forlì began work on its city walls. During the thirteenth century, the city passed backwards and forwards between the Guelphs and the Ghibellines. Towards the middle of the fifteenth century the city passed into the hands of the Visconti family, then of the Holy See and later to the Sforza family. At that time Forlì was guarded by three fortresses: Ravaldino, built in about 1360, San Pietro which was demolished in 1741 and by a small fortress which was destroyed in 1406 and then re-built by the Ordelaffi in 1411.

Today only a few traces remain of the old city walls, one of these is the square rampart known as the Tower of Lilies. The fortress of Rivaldino was reinforced a number of times in order to meet defence requirements.

Piazza Maggiore, Neptune's Fountain and the Towers of Saint Petronio

Neptune's Fountain, the masterpiece of Gianbologna, is considered one of the most beautiful and harmonious fountains of the Renaissance. It was erected between 1564 and 1566.
The statue of the sea god is known to the Bolognese as "Il Gigante" (the Giant).

From different aspects the statue is quite unique: the thumb on the left hand, when seen from a certain angle, is quite remarkable. Piazza Maggiore represents the monumental centre of the city. Linked to Piazza del Nettuno, the two give the impression of being one single square, dominated by the wondrous church of Saint Petronio with its dark, unfinished façade. On the south side lies the crenellated Palazzo dei Notai (Notaries' Palace), and to the east the Palazzo Comunale (Town hall). The opposite side of the square comprises the Palazzo dei Banchi (Bank Palace) and in front of the church sits the Palazzo del Podestà. Saint Petronio is the fifth largest Catholic church, started in 1390 and finished between the fifteenth and sixteenth centuries.

The central doorway on the incomplete façade figures one of the most precious cycles of the early Renaissance, depicting stories from the Old and New Testament by Jacopo Della Quercia. There were once about two hundred towers soaring above the city of Bologna, and although today only seventy-seven are left standing, many of them much reduced, they are still the undisputed symbol of the city.

Estense Castle is the greatest masterpiece of military architecture in the late Middle Ages. Built in 1385 by order of the Marquis Nicolò I, the architect was Bartolino Ploti. The square structure rises out of a large moat. The castle has four square towers which are linked together with thick walls, one of which predates the castle itself, and the entrances were armed in order to protect the draw bridges.

The ancient crenellations on the top of the building were knocked down in the sixteenth century and replaced with the marble balustrade seen today. The tops of the towers were also added to at that time and the building took on a Renaissance air reflecting the splendid interior of the princely residence. Some of the inner halls, such as that of the Giants or the Games, have ceilings sumptuously decorated with imagery of ancient athletics games.

Sanctuary of the Madonna of St. Luke

Beyond the Roman gateway of Porta Saragozza in Bologna rises a hill that was once known as Santa Maria in Monte (Saint Mary on the Hill) or Colle della Guardia (the Guard's Hill).
Today it is simply called Colle di San Luca (Saint Luke's Hill). Around 1110 a small hermitage was formed on the top of the hill where the remains of the Madonna of Saint Luke were kept for many years.
The old church, re-built in 1306 and enlarged in 1481 was completely restructured and designed by Carlo Dotti in 1757.

This beautifully adorned and painted building still houses the venerated Byzantine Madonna behind the main altar. 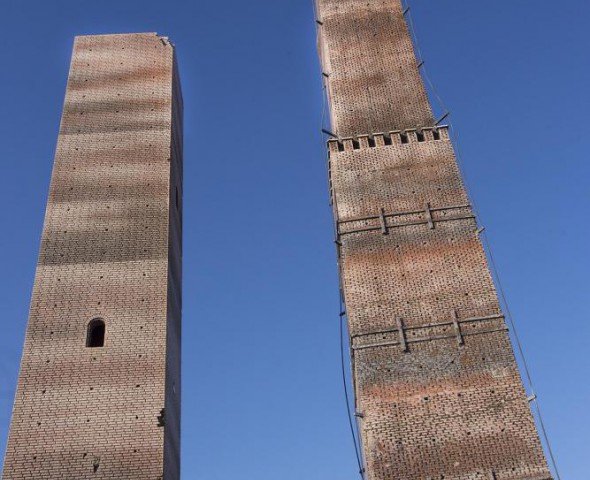 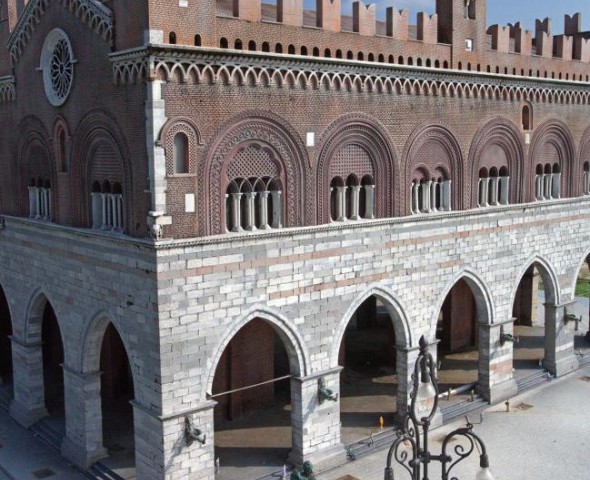 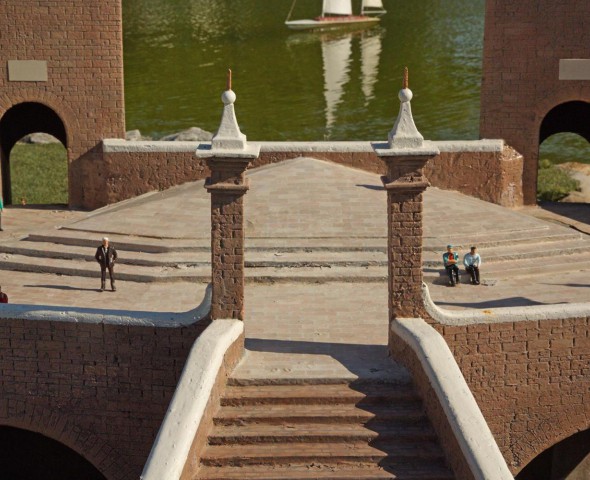